Shwenandaw Kyaung (or Shwenandaw Monastery) (translates to Golden Palace Monastery) is an small historic Buddhist monastery at the base of Mandalay Hill on 12th Street between 64th & 62nd Streets, near the North East corner of the Royal palace moat in Mandalay, Myanmar (Burma). It sits right in front of the large marble Atumashi Kyaung (Atumashi Monastery) and directly in front of the State Pariyatti Sasana University.

Shwenandaw Kyaung was not initially built as a monastery, rather it was one of the buildings in the Royal Palace at Amarapura, South of Mandalay. It would have been originally built sometime between 1780 and 1820. It was removed from Amarapura and reassembled at the Royal Palace in Mandalay by King Mindon around 1858. The building was then used by King Mindon as his private sleeping quarters (bedroom) till his death in 1878.

After Mindon’s death his son King Thibaw Min, supposedly believing the building to be haunted by the spirit of his dead father, had it dismantled and relocated outside the Royal Palace grounds in 1883 where is was given over to the local Buddhist monks to use as a monastery. 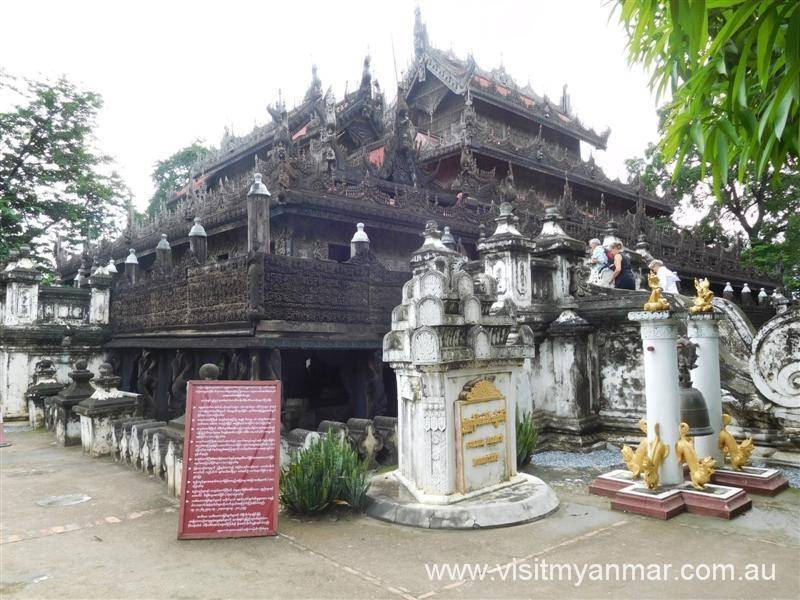 We have to thank Thibaw for this generous gift for an extra special reason. During WW2 the allied forces bombed the Royal Palace which was being held by Japanese troops. As a result of the bombing unfortunately the Royal Palace burnt to the ground. Lucky for us Shwenandaw Kyaung was located outside the Royal Palace grounds so it survived the rigours of war and is now the only remaining original major building from the Royal Palace.

The name Golden Palace Monastery derives from three threads. As it was the King’s royal sleeping chamber it was originally gilded all over in gold, it was then taken from the palace and given to the Buddhist monks to use as a monastery. Gold, Palace, Monastery – simple logic.

Thou it is not a massive building it is very beautiful to see. When you go there, and before you go upstairs, have a look under the building. You will see that the whole structure is supported by massive teak logs some of which are beautifully carved with dragons etc.

Going upstairs you will see beautiful examples of ancient carvings all over the roof and on the outside of the balcony, on the walls, ceilings and doors, just about everywhere has intricate carvings except the floor. All of the carvings depict various Buddhists myths and stories from the past.

As it is a monastery it does not house a large statue of Buddha like you see at some of the major temples. When you go inside you will find an area right in the middle that houses a small golden statue that is still beautiful to see. The boundary “fence” around the statue has some very fine carvings on it at the corners. If you look behind this area there are some very old gilded display cases housing ancient statues of Buddha inside.

If you want to see what a real ancient Royal Palace building looked like then head on over to the Shwenandaw Kyaung. Definitely worth a look.