Legend has it that the Mahamuni Statue housed in the temple is one of only three real likenesses to Buddha made on Earth during his lifetime which is why this statue is so revered by the Buddhists in Myanmar. Made of bronze it was reputed to have been originally cast in the ancient State of Arakan in North West Myanmar sometime around 550BC, making it around 2500 years old. It was definately in Arakan around 1050AD when the Burmese King of Bagan tried to move it to Bagan. It was eventually removed from Arakan around 1785AD and relocated to its present home in Mandalay. 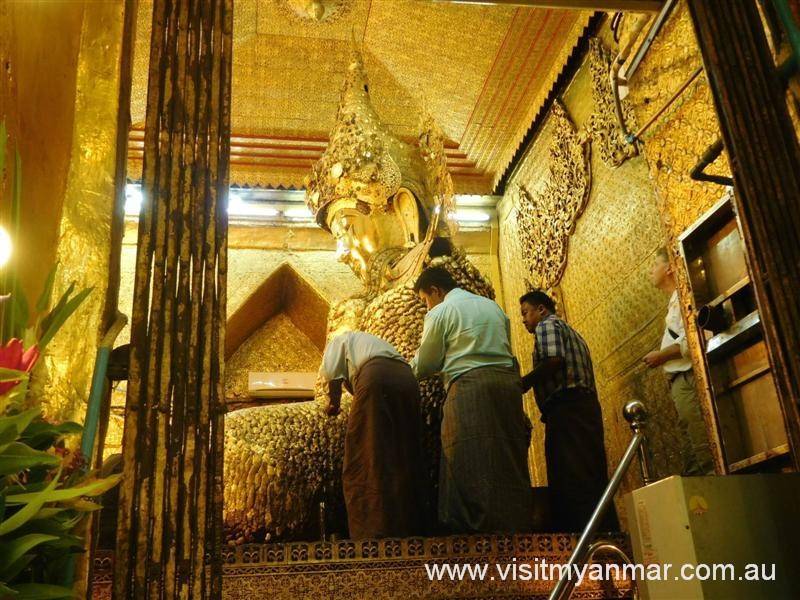 The temple is located on 82nd street near 47th Street. From 26th Street just go south on 82nd Street, it is one way South.

You enter the temple complex via any one of the four pedestrian walkways, one on every side, though the main entrance is via 82nd Street. Going down the walkway you will pass by a collection of little shops selling religious artifacts, flowers and the little gold leaf squares that only men are allowed to put on the statue. At the end of the walkway you will have to pay the 1000K camera fee at the little station outside the main central area of the temple. If you are wearing shorts you may be required to also put on a free longi which you give back at the station on leaving.

In front of the Mahamuni statue the main prayer area is divided by railings into sections. Ladies at the back and men at the front.

Going outside you will get a good view of the central statue temple building with its highly ornately carved tiered roof. Against the outer wall you will see the ceremonial drum tower with two drums right at the top. Off to the right is a row of sacred bells, some smaller ones and a big one.

In the walkways there are some very beautiful replicas of old fresco paintings depicting scenes of long ago. 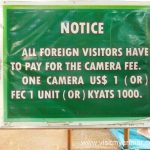 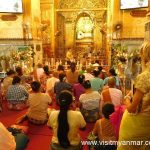 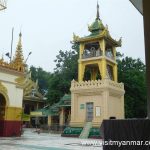 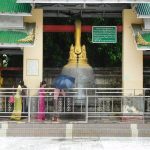 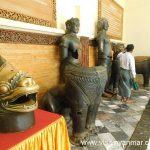 If you go to the Mahamuni Buddha Temple in early February you will see the annual festival called the “Mahamuni Paya Pwe” (Paya = Pagoda, Pwe = Festival). During this festival over several days the monks read a sermon from Buddha to his mother called the “Book of Conditional Relations” which is a sacred scripture to Buddhists. As well as the book reading there is plenty of fun with music, dancing and puppet theatres to entertain the locals and travellers. Mahamuni Buddha Temple can get very crowded at this time of year.