Inwa (Innwa or Ava or Awa) township is about 18Km South of the Mandalay Royal Palace. It was the on-again off-again royal capital of Burma five times between 1360 to 1840 AD. Different kings would occasionally move the royal capital elsewhere to places like Sagaing and Amarapura or the area was invaded by neighbouring states and the capital moved for a time.

Inwa (Ava) sits on the southern side of the junction of the Irrawaddy (Ayeyarwady) and Myitnge Rivers. The two rivers form roughly the Northern and Eastern edges of the once capital.

One of the early kings had workers build a huge fortified wall and dig a moat canal along the Southern and Western sides of the area linking the two rivers to form a rectuangular royal palace area on a man made little island. After that they built a zigzag wall several kilometers outside the royal city again to the South and West to protect the local villagers who lived outside the palace grounds.

On the map above you can see Inwa as it looks today and what it looked like nearly 200 years ago. The hand drawn map is from the 1907 book titled “Mandalay and other cities of the past in Burma” which contains a map of Inwa drawn in 1827.

The majority of the ancient city was devastated by the 1838 earthquake which caused major damage throughout the whole country. Around 1840 the royal capital was moved to Amarapura which was thought to be more secure.

Today there are a small number of buildings that have survived mostly intact where you can gain a glimpse into the lives of the people who once inhabited this ancient city.

There are two main areas to see the ancient sights at Inwa, inside and outside the once royal city – 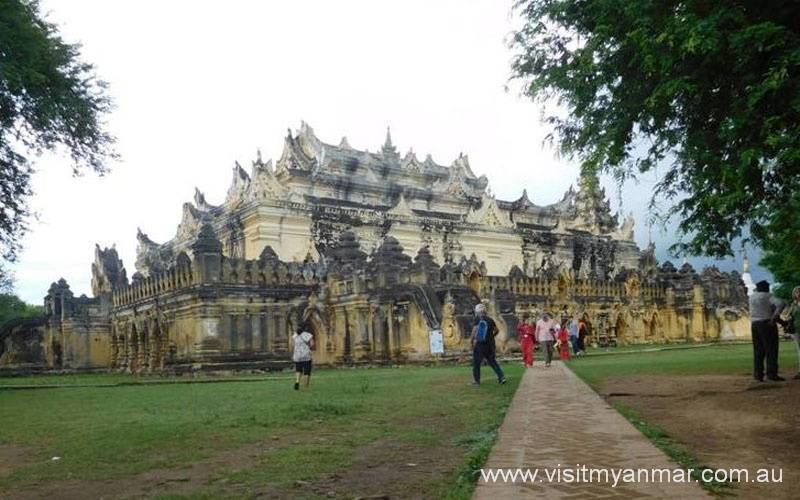 Travellers have two ways to get to Inwa (Ava) depending on your mode of transport. The most common way is to travel by car or bus from Mandalay city down past the Sagaing Bridge to the Myitnge River. There you pay 1,200K for a return ferry boat ticket. Ferries run about every 15 minutes. The local ferry takes you the short trip over to Inwa.

You disembark at a little village with several cafes and souvenier shops and dozens of local horse cart drivers willing to take you for several hours around the ancient sites. The cost for the horse cart ride is 10-12,000K. 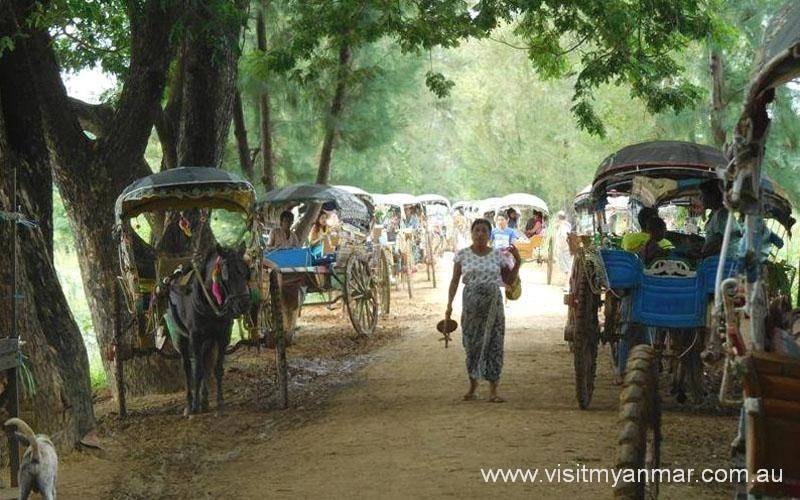 Most horse cart drivers will take you on a set route to about four of the sites, typically the Bagaya Manastery, Yadana Hsemee Pagoda Complex, Nanmyin Watchtower and the Maha Aungmye Bonzan Monastery. If you want to go to somewhere specific make sure you work it out with the driver before you head off.

Alternately you can travel by car or motorbike down the Mandalay – Yangon Highway and turn at the big roundabout after you cross the bridge South of Inwa. From here you travel a short distance North to Inwa. By going this route you have far more scope to take in all the most visited sites plus see some places like Le Htat Gyi Paya that are never visited by horse cart as they are too far outside Inwa.

Whichever way you go you will find a day trip to Inwa (Ava) to be a very enjoyable experience.