The Bagaya Kyaung (or Bagaya Monastery) in Amarapura, Mandalay is reported as being built by King Bagyidaw around 1834.

Kyaung in Burmese translates to Monastery in English. Sometimes the monastery is erronously referred to as Bagaya Kyaung Monastery, which is a bit like describing a car as a Ford Mustang Mustang. 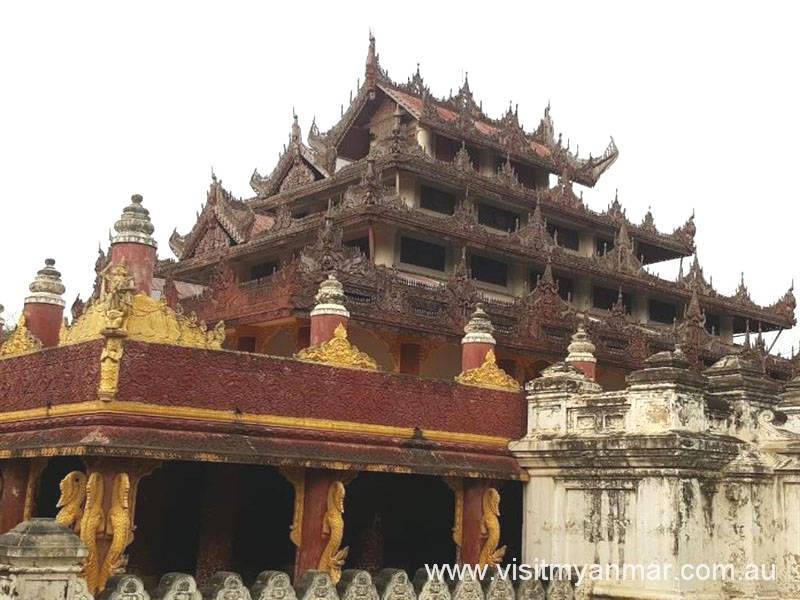 It can also be a bit confusing to some people as there is another monastery also called Bagaya Kyaung which is about 10 kilometres further South in Inwa. Both are well worth checking out.

The Bagaya Kyaung in Amarapura is situated off Mandalay-Shwebo Road about the mid point of the western wall of the old Royal Palace. The monastery is still in use today. Out the back of the monastery you will see the remnants of the moat that formed the western side of the original Royal Palace.

The fancy carved teak woodwork and decorations on the outside of the building are beautifully done. The roof style is the older style five tiered flyaway red roof. Every edge of the whole roof is adorned with exquisitey carved panels that must have taken the craftsmen a long time to complete, some amazing details. The whole monastery is coloured red white and gold.

Inside you will find a museum with a library of ancient pali scripts as well as a good collection of Buddha statues.

Bagaya Kyaung (Bagaya Monastery) is not one of the main sites that tour operators would normally take you to visit, so when you visit it you should find it much quiter than the others. Worth a visit, very photogenic.