Mandalay Hill is the only high point in the otherwise flat landscape surrounding Mandalay in Northern Myanmar.

The main pagoda on top of Mandalay Hill is called the Su Taung Pyi Pagoda (also called Sutaungpyae Pagoda). The pagoda has terraces running all around it which offers terrific views from the Shan mountains in the East, Mandalay and Sagaing in the South around to the Irrawaddy (Ayeyarwady) River and Mingun in the West. If it is a clear sky you will be rewarded with a lovely sunset looking over the Irrawaddy River towards Mingun. 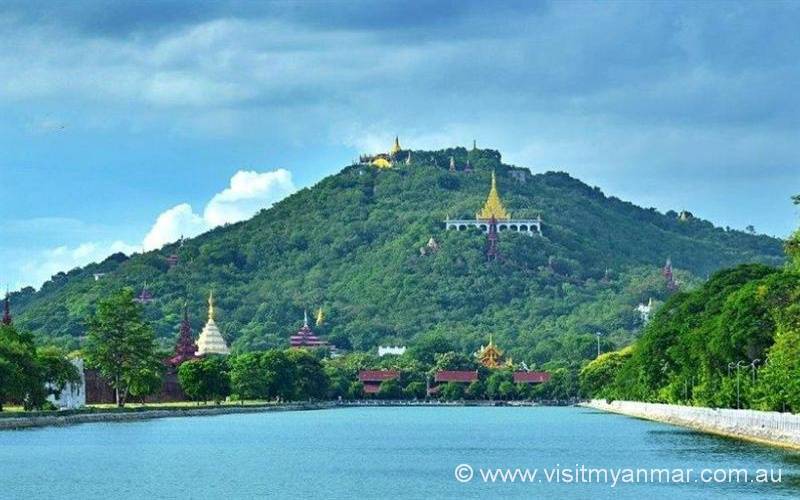 You have two options to get to the top of Mandalay Hill, you can either walk up any of the four covered walkways or you can ride/drive up the one way roadway and arrive at the car park at the base of the summit and use the escalators to take you to the pagoda on top.

Taking the main South route start between the two huge chinthe lions in 10th Street right behind Kyauk Taw Gyi Pagoda and just to the right of the one way roadway on the corner of 10th and 68th Streets. It is a gentle 35 minute walk up covered walkways with lots of steps. You will pass several smaller pagodas along the way and some of the walkway sections have many locals selling souveniers and refreshments. There are plenty of places to stop and have a rest. Take a bottle of water. 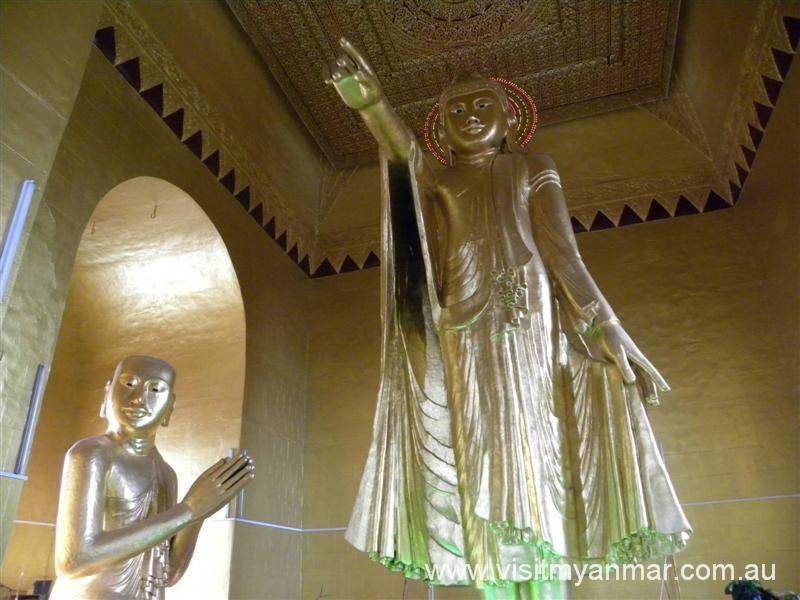 About half way up the hill the South and South-East walkways combine into one walkway for the remainder of the walk. Up ahead is the Shweyattaw Pagoda which has a large standing Buddha with his arm raised and pointing back to Mandalay. Legend has it that when Buddha first stood on this spot he pointed to where Mandalay now is and said that in the year 2400 in the Buddhist calendar (1857AD) a great city would grow up at the foot of Mandalay Hill. Indeed it did. King Mindon created Mandalay city in 1857 when he moved his capital from Amarapura to Mandalay.

Further up you will come across a small pagoda that has some strange statues around it. One is of Sanda Muhki. Legend has it that the ogress cut off her own breasts to offer to the Buddha. Buddha was so moved he prophesied she would be rewarded in 2400 by becoming a great king, she was reincarnated as King Mindon. There are a few other statues of the ogre king and his army on the same terrace and images of some animals (rabbit, lizard, chicken) purporting to represent various reincarnations of the Buddha.

From there go up to Su Taung Pyi Pagoda at the top. The pagoda itself is splendid and if it is a sunny day you will be dazzled by all the multi coloured little mirror tiles on the outer walls and posts of the pagoda. Some beautiful statues and intricate work done on the walls with the mirror tiles. Then take in the magnificent views and hopefully a good sunset. It can get a bit crowded in high season with tourists going there for the sunset. The other option for a sunset is at U-Bein Bridge in South Mandalay at Amarapura, but it also gets crowded..

If you plan to stay on Mandalay Hill to see the sunset then take a torch with you as sections of the walk back down the stairway will be in the dark.

At the corner of 68th and 10th Streets (just to the left of the chinte lions) is the start of the one-way road that winds up to the top of Mandalay Hill. It is called Mandalay Hill Street. Who would have guessed. The hill is 250m high. The trip can be done by either car, motobike or bicycle (if you like hill climbs). When you arrive at the top there is a place on the left for parking motorbikes and bicycles. There are several small restaurants and shops here that serve decent cheap meals and some have good views looking down over Mandalay.

From the car park go right and take the escalator tower up three levels to the pagoda at the top. After getting off the escalator you will have to pay the 1,000 Kyat ($1) camera fee. Enjoy exploring the lovely Pagoda and the beautiful views from the terrace.

To get back down to the car park take the lift to the left of the escalator, you may have to stand in line for a little while. If you wait long enough you may be able to take the escalator back down as they often change it to a down escalator after sunset. During daylight it only goes up.

Both the road up and down are windy, single lane and one-way. Leave the car park and continue down the road to exit on 66th Street. Turn right and you will come back to the corner of the Royal Palace Moat on the Corner of 66th and 12th Streets. 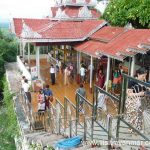 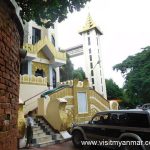 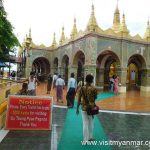 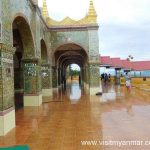 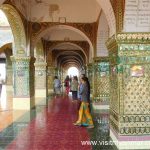 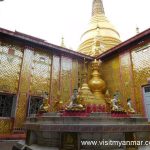 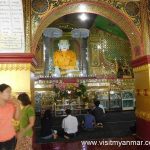 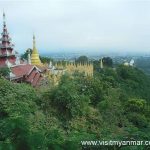 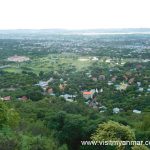 Mandalay Hill is certainally one of the must visit places to include when you visit Mandalay, Myanmar.